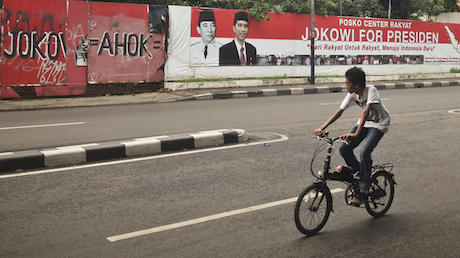 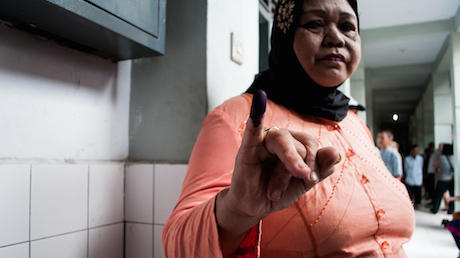 As Indonesians head to polling booths to elect a new president, the final polls show Jakarta governor Joko "Jokowi" Widodo with the slenderest of leads over former general Prabowo Subianto. Either a Jokowi or a Prabowo presidency are very real possibilities.

This cliffhanger is a far cry from the result that looked on the cards immediately after the legislative election in April, when a Jokowi landslide seemed likely. Then, Jokowi had led Prabowo for more than a year in reputable public opinion surveys, and the just-completed election provided no evidence of unanticipated support for Prabowo. Surveys also told us that Jokowi's man-of-the-people image and honest reputation were most important to many more voters than was Prabowo's trademark firmness. Nor did there seem to be any new viable rivals to Jokowi in prospect.

How did the situation change from an apparent landslide to cliffhanger?

Prabowo has run the slicker, more effective campaign, in contrast to Jokowi's disorganised pitch to voters. Jokowi has run hours behind time at most of the small sample of his campaign events I've attended. At one of these events, he was six hours late, and almost everybody had left before he arrived, although those that remained still greeted him passionately.

Jokowi has also invited other parties to join him "without conditions", and pledged to form a professional cabinet, rather than divvying up seats to parties in exchange for support, an approach that has helped Prabowo to corral together a larger coalition. By contrast, the media has reported Prabowo openly promising a key ministerial post to Golkar party head Abruzial Bakrie, as well as the head of Prabowo's campaign team claiming to have been promised a senior appointment.

Nor has Jokowi appeared to receive the full support of the Indonesian Democratic Struggle Party (PDI-P). A win for him would not suit all of the party's senior members, and observers have reported on the party's failure to mobilise to support him. Prabowo, by contrast, has the luxury of having the Greater Indonesia Movement (Gerindra) party as his personal political vehicle.

The prevailing wisdom regarding the new president has been that neither candidate will be as open to Australia as President Yudhoyono has been. I think that's too pessimistic, at least in the case of Jokowi.

Prabowo's campaign has also remained relentlessly on-message. His narrative is one of a false crisis - an Indonesia under threat of being recolonised, its wealth flowing to foreigners, in which Indonesians are not masters of their own house, and dishonest politicians in the sway of nefarious backers threaten the political system.

Prabowo's firm leadership thus becomes crucial to save Indonesia and bring about strong, prosperous nation. Prabowo has repeatedly delivered variations on this stump speech, mixed with populist promises that a farmer's or petty trader's child can become a professor or a general. So frequently has he claimed that huge amounts of Indonesia's wealth are "leaking", that he makes faux apologies that people may be boring of his rhetoric.

Jokowi hasn't got his message out there in the same volume, nor established as clear a narrative.  The short speeches he has made at several campaign events I have attended almost take for granted that people support him, and have focused more on what these people should do to win the election than on drawing new supporters into his orbit.

A core feature of Jokowi's campaign has been to make it about his personal qualities as a man of the people politician - a key slogan is "Jokowi [and running mate] JK [Jusuf Kalla] are us". This is actually a fundamental difference between the two candidates: Jokowi is promising to govern with the people, Prabowo over them. But the Jokowi camp has consistently neglected lines of attack that would make this difference clear.

The Jokowi camp has not exacted Prabowo's anti-democratic rhetoric to any scrutiny or wider publicity, for instance by explaining what it would mean to go back to Indonesia's original 1945 constitution, or making sure that everyone knows that Prabowo has expressed opposition to direct elections. Nor have they spread the message of Prabowo's involvement in the kidnappings of activists in the final days of his then father-in-law's Suharto's authoritarian regime, and explained to the Indonesian people why they should care about this.

In fact the Prabowo machine has run a much more effective negative campaign against Jokowi. They have characterised him as inexperienced - having never held a national-level position - and as a manager rather than a leader, issues the Jokowi campaign has not done a good job of rebutting. On top of this, Jokowi in particular has been the target of a ruthless smear campaign.

What would a win for Jokowi or Prabowo mean for Australia-Indonesia relations? It's worth stating at the outset that Australia is hardly apporaching these elections from an ideal starting point. Although the return of Indonesia's ambassador to Canberra and Prime Minister Abbott's visit to Batam in June each suggest that things appear in chain to normalise ties, the memories of perceived Australian arrogance and distrust will not quickly fade.

The prevailing wisdom regarding the new president has been that neither candidate will be as open to Australia as President Yudhoyono has been.

I think that's too pessimistic, at least in the case of Jokowi, although he would bring initial uncertainty after a decade of engaging with Yudhoyono. The concern with Jokowi is not that he would change Indonesia's overall foreign policy orientation markedly, but rather that he may be more overtly nationalist than Yudhoyono. Certainly Jokowi provided a glimpse of what could be a more explicitly nationalist stance in the candidate debate on foreign policy. In this debate, Jokowi mixed a statement of support for building closer ties with Australia, with the observation that Australia regarded Indonesia as a weaker country, with disregard for its authority, a situation a future president must address.

Prabowo is a different prospect. A Prabowo presidency looms as a bad scenario for bilateral ties. Prabowo's campaign has been one of overt nationalism. He has mixed statements of wanting good international relations with a torrent of rhetoric about Indonesians not being masters of their own house, that Indonesia is at risk of being colonised again, and that massive sums of Indonesia's wealth leaking overseas. It is possible Prabowo could make pragmatic gestures on bilateral issues that have been persistent irritants, but the spectre of a possible nationalist response would be ever-present.

Neither Prabowo's overt nationalism nor his chequered human rights background are actually the main potential stumbling block for bilateral relations, however. What Australians should focus on is the risk that Prabowo as president will try to wind back democracy, and what that would mean for bilateral ties.

Australia of course engaged with an authoritarian Indonesia prior to 1998, and you'd expect the Australian government to engage pragmatically with an Indonesian leader of almost any stripe.

But Australia and Indonesia's status as neighbouring democracies over the past sixteen years has become a big selling point in the push to do more together. Professor Tim Lindsey, on the ABC's Q&A program filmed in Jakarta last year, described Indonesia and Australia as natural partners, in part because of the two countries' shared future as democracies. On the same program, Jakarta Post editor-in-chief Meidyatama Suryodiningrat said Indonesia's primary allies weould be those countries with which Indonesia shares common values.

If Prabowo is elected president and does act on his persistent anti-democratic rhetoric, he will certainly face resistance. But if Indonesia did become less democratic or non-democratic under his rule, we would lose the common tie of democracy.

The tenor of bilateral relations would then change, as engagement with Indonesia became controversial. Rather than be a democratic neighbour with which Australia sought opportunities to engage with to work towards broader goals, Indonesia might then become a country Australia worked with out of necessity.

This is an updated and edited version of a presentation to a seminar hosted by Election Watch/CILIS/ERRN on 2 July at the University of Melbourne. Video of the seminar will be posted shortly.