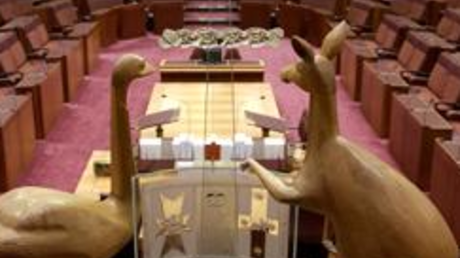 "AT LEAST DO SOMETHING!  DO!"  former Hawthorn coach John Kennedy Snr (right) famously urged his players during the 1975 VFL Grand Final. The rousing address was recorded, and now forms part of footy folklore. But the speech might also speak volumes about our approach to national politics.

Let's call it Do Something-ism. Exactly what the government should do is less frequently articulated (let alone the elusive 'how?').

Policy responses to big issues are inevitably hard and boring. They involve compromise and time to implement. This isn't the West Wing, where policy conundrums are identified and solved within 42 minutes. Swift action by governments or 'crackdowns' by authorities may capture the headlines — and temporarily sooth the concerns of the talkback callers — but rarely do they produce sustained results.

Do Something-ism is a gift to oppositions who can exploit perceptions of government inaction without necessarily needing to propose an alternative course of action. Prime Minister Tony Abbott accused Julia Gillard of leading a "do nothing government", while Labor used the same line of attack against former Victorian Liberal Premier, Ted Baillieu. Both leaders have now been confined to the political dustbin.

This isn't the West Wing, where policy conundrums are identified and solved within 42 minutes.

Of course, governments also use Do Something-ism to their advantage. When Kevin Rudd returned to the Prime Ministership in June 2013, he immediately set about tweaking Labor policy in areas of perceived electoral weakness; striking an asylum seeker deal with PNG, "axing" the carbon tax, reforming Labor's internal structures, etc.

These policy modifications were soon subjected to legitimate and probing questions (Was Mr Rudd overstating the PNG deal? Was he really "axing" the tax? Were the party reforms — later dubbed "Kevin's curse" — rushed and ill conceived?). But in a sense, none of this mattered. Mr Rudd was doing something. He was acting. The details were irrelevant.

When Gruen Nation analysed a Coalition campaign advertisement that featured little more than then-Shadow Treasurer Joe Hockey reciting a laundry lists of economic and budgetary data (see the clip in our party ad database), the ABC's Annabel Crabb put it this way:

"[That ad's] main aim to to kind of bombard you with wall-of-sound statistics so that your overall impression is: 'Oh my head hurts, so many numbers'.

That is, to leave the viewer with the impression of action and competency. To demonstrate Joe Hockey has what it takes to Do Something about the economy. Again, the details were superfluous.

A genuinely engaged public could force our political leaders to talk more about policy, or even abandon 'thought bubble' policies that are never going to work.

So when Australians complain about the parties' lack of policies, or the poor standard of debate in Australia, they should recognise the power for change resides with them.

If the average voters' political engagement extended beyond simply wanting politicians to Do Something — to instead include discussion about what they should do, how it should be done, who should pay for it and what compromises would be required — Australia would be a better place.

A genuinely engaged public could force our political leaders to talk more about policy, or even abandon 'thought bubble' policies that are never going to work.

If you need any further arguments against the pervasive cancer that is Do Something-ism, consider this: Hawthorn lost that 1975 Grand Final.

Perhaps the players would have benefited more from being told what to do.