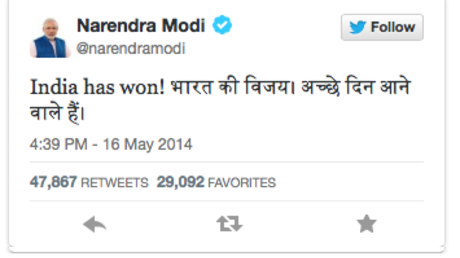 The Verdict: How the Modi "Wave" became a tsunami

As the results of the biggest democratic exercise in history began to flow on 16 May 2014, and it became undeniable that the Congress Party had been all but wiped out by the BJP’s Narendra Modi ‘Wave’, the ruling party’s first family – Sonia Gandhi, the party president and her son Rahul Gandhi, the vice president - walked out to accept defeat and face the media.

Rahul Gandhi chose to speak first. In a statement that was short and, it seemed, ad-libbed, he uttered four sentences.

“I would like to start by congratulating the new Government. They have been given the mandate by the people of our country, so I wish the new government all the best. On my part (a long pause and a shy smirk), Congress Party has done pretty badly. There’s a lot for us to think about and as the vice president of the party, I hold myself responsible for what has happened.”  At which point he smiled, rolled up his sleeves, and stood aside to allow his mother to speak.

For someone who headed the Congress campaign and was projected as prime ministerial material, this 30-second effort was deeply unimpressive. As was – in the consensus view of the pundits - his performance throughout the campaign. As his mother spoke, he smiled and winked. He came across as ‘irresponsible’, ‘immature’ and ‘out of sync’, according to the commentators.

No sooner had Sonia Gandhi finished reading out her statement, Rahul was whisked away by his ‘over-protective’ mother.

The Gandhis and the Congress Party are so entwined that it is difficult to imagine one surviving without the other.

This was the worst defeat ever suffered by Congress, India’s longest-enduring political party.

The Indian electorate reduced them to just 44 seats in the Lower House, hemorrhaging 162 seats. Congress does not even have the 10 per cent of the numbers required to qualify to put forward a Leader of the Opposition in the Parliament. Most of its ministers – Kapil Sibal, Ajay Maken, Sriprakash Jaishwal, Sachin Pilot, Farooq Abdullah - have gone.

While the mother-son duo won their own respective seats – Amethi and Rae Bareli – Congress did not manage to win a single seat except these two in India’s biggest state - Uttar Pradesh (UP sends 80 MPs to the parliament). The party has been wiped out in Gujarat, Rajasthan, Uttarakhand, Delhi, Goa, Jammu & Kashmir, Himachal Pradesh and decimated in Karnataka, Chattisgarh, Maharashtra, Assam, Bihar and Madhya Pradesh. Congress leadership not only disappointed its cadre, supporters and voters but the party ministers and other senior leaders. Many insiders within the party blame the leadership for their dismal loss.

So is it the end of the road for the Gandhi family and, if so, what of the fate of the Congress Party without the dynasty which has so defined it?

Sonia Gandhi has been the president since 1998 and is likely near the end of her career, owing to her ill health. Rahul Gandhi’s disastrous campaign in these elections mean there are few who are likely to back him to take over the reins, at least not in the shorter term.

Priyanka Gandhi, his sister, while a promising prospect is, at the moment, not seen as a viable one. With little experience in party affairs, Priyanka’s role has always been limited to campaigning for her brother and mother during elections.

Naturally these are issues weighing heavily on the minds of the senior party leaders. Three days after being pushed out of most parts of the country, the party held its Congress Working Committee (CWC) meeting in New Delhi to discuss the debacle. Insiders told the media waiting outside that Sonia and Rahul had both offered their resignations, but these were not accepted.

Senior political columnist Tavleen Singh tweeted: “Did anyone believe the president and vice president of Indian National Congress private limited would be allowed to resign?”

The Gandhis and the Congress Party are so entwined that it is difficult to imagine one surviving without the other. History has witnessed it. Take the Gandhis out of Congress and the party will crumble.

After Rajiv Gandhi’s assassination in 1991, the party leaders - who had grown so dependent on the family since Independence – urged his Italian-born widow Sonia to take over the leadership. She chose to keep her distance at that time and instead PV Narshimha Rao (who went onto become India’s Prime Minister) became leader. But the Congress party soon crumbled post his tenure.

An exodus of the senior ranks compelled the party membership to return to Sonia Gandhi. In her, they saw someone who could save them from extinction. She ultimately relented, becoming the fifth member of  the family to hold the post (following Motilal Nehru, Jawaharlal Nehru, Indira Gandhi, Rajiv Gandhi).

She fought her first election in 1999 and became Leader of Opposition in the Parliament. No one then imagined she could haul Congress back into the limelight. For the next five years, Sonia worked with the senior leaders, learnt to make political decisions, grappled with the nitty gritty.

In 2004, Sonia Gandhi took to the road and campaigned across the country reaching out to the ‘aam aadmi’ (common man), the demographic ignored by the rival National Demographic Alliance’s ‘India Shining’ campaign. Congress made an astounding comeback and went onto govern India for a decade. The matriarch had restored the flailing party.

Today it is Rahul Gandhi standing at the crossroads, the party’s destiny in his hands. He has made mistakes - some terrible ones. Implementing US-style primaries without knowing the names of the party cadre who have dedicated their entire lives for the Congress Party showcased his misplaced priorities.

Blaming the ‘corrupt government’ and ‘anti-incumbency’ factor, as he did through the campaign, is definitely far more convenient than owing up to one’s feeble leadership skills. Not recognising and acknowledging Narendra Modi as a formidable competition was another whopping blunder.

But not everything is lost. Still in his early 40s, he has almost two more decades of active professional life to look forward to. He needs to shed his moony  self to come across as a leader whom his cadre can rely on and look up to.

Rahul – who barely appeared to be in touch with his party members - needs to tour the vast country, get close to the Congress foot soldiers, work from the grassroots to restructure the party. With a rival as formidable as Narendra Modi, he needs to acknowledge that he cannot assume leadership as his birthright.

Rahul Gandhi needs to sit in the Opposition, not just for the sake of it, but to hold the ruling party accountable at every step. Becoming engaged, involved and accountable will not only bring him back to the fore but will also go a long way in reviving the spirits of his party.

For Rahul, perhaps it is time to revisit that commitment. It's time to rise to the challenge of resurrecting himself and his party. If he needs a model, he might recall that his mother fought the charismatic and popular Atal Behari Vajpayee and won.