Coalition's carbon budget shortfall will be $4 billion unless ... 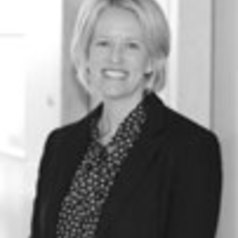 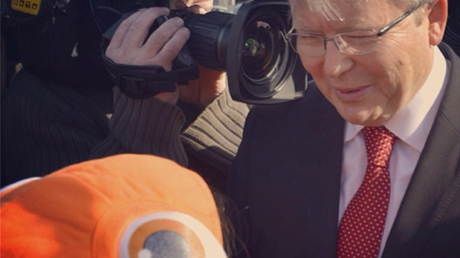 Clowning around is no laughing matter 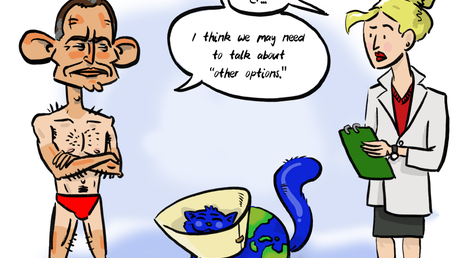 "Direct Action" may not be quite so direct ... 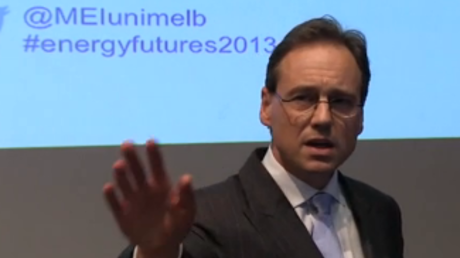 The Coalition has dramatically under-budgeted its Direct Action plan on climate change by $4 billion. On the Coalition’s current budget the plan will fail to meet Australia’s emissions target of 5% by 2020; and, instead, emissions are projected to grow by at least 9% above 2000 levels by 2020.

So what’s gone wrong? And what mechanisms might the Coalition employ to reduce this dramatic shortfall?

The findings were released in a report from The Climate Institute yesterday, using modelling from Monash University and consultants SKM.

The projections are worse for 2050, with emissions projected to increase by 45% above 2000 levels, even with extra funding.

Part of the problem here is the Coalition’s unwillingness to use what are known as international carbon units – one tonne of carbon dioxide equivalent generated from mitigation overseas – to make up emissions shortfalls. The report says that, by including international units, the shortfall could be reduced to a more manageable A$190 million.

Access to international units can be gained through linking with another emissions trading scheme or through an offset mechanism, such as the Clean Development Mechanism.

So, why doesn’t the Coalition reach out internationally?

Outlined in 2010 and in speeches by shadow environment minister Greg Hunt since, the Coalition’s Direct Action Plan promises that Australia will achieve its 5% target based on purely domestic action, without a “great big new tax to fund outcomes in other countries”.

This is not only parochial, but suggests that climate change recognises national borders.

Reading through the 2010 document we’re invited to conjure up images of a green army planting trees, mums and dads installing solar panels and farmers storing soil on their land. As Abbott has said, it does indeed provide a uniquely Australian solution. It claims that these activities will cost taxpayers less than the Government’s scheme.

While this sounds attractive to voters, it is time that the Coalition faced up to reality.

If the Coalition proceeds with Direct Action, then it should at least consider purchasing some international units. This would avoid us either being way off achieving the minimum 5% target, or a huge cost to Australian taxpayers to meet the target.

Currently Direct Action relies on creating incentives for industry to make emission cuts. The process is tax-payer funded, so essentially the public will be paying polluters to change their ways.

Another element of the plan is to impose a penalty on companies that exceed their business-as-usual emission levels. The Coalition’s policy cannot actually guarantee any reductions in emissions. Businesses may choose to carry on polluting at current levels with no penalty.

To shift some of the burden from tax payers to polluters, the Coalition should set stringent emissions baselines for industry, well below business as usual.

It should also provide the option for industry to meet these limits through purchasing international units.

While the approach of setting baselines for companies would be more expensive to implement than the Government’s emissions trading scheme, it would at least ensure that industry is required to make a contribution towards meeting Australia’s target and pay a price for continuing to pollute. While the Government’s scheme is based on an absolute “cap” on carbon emissions, the Coalition will set limits for individual companies.

It’s all the same atmosphere

There are at least three reasons why it makes sense for internationally sourced carbon abatement to be recognised in an Australian system, whatever the policy approach.

First, climate change is a global problem so it doesn’t matter where emission reductions are achieved so long as those reductions are real, additional to business as usual, and measurable. This is a key point. If one accepts the science underpinning climate change, then it should be clear that an emission reduction achieved in Vietnam is equal in climatic terms to a reduction in Australia.

Second, the marginal cost of abatement in Australia is relatively high compared to other countries. It is more economical to allow emitters to purchase abatement of carbon dioxide from other countries, where abatement is a fraction of the cost. Investing in clean technology in developing countries also plays an important role in facilitating clean development, also in Australia’s national interest.

Finally, linking our carbon price to international markets means that Australia’s carbon price will be set by the European price. There will always be claims by industry, the media, and the Coalition that this price is either too high or too low. But the current low level gives Australia an opportunity to go for a more ambitious target, beyond 5% by 2020, or even beyond the upper limit for the Government and Coalition of 25%.

These measures would help Australia transition its economy away from fossil fuels, and shape international climate agreements over the next two years. Action within Australia is an important pre-requisite to having influence on the international stage.

Australia’s transition to a clean economy has started

Australia’s current carbon pricing mechanism has had minimal impact on consumer prices, but it has contributed to a reduced electricity demand. It is working to transition Australia to a low carbon economy.

While the Coalition remains determined to repeal it, it should at least consider allowing some of the agreed target to be achieved via international abatement. Otherwise Australian tax payers will be left to foot the bill.

This article was originally published in The Conversation